Ensuring the survival of sea otters in their habitats.

Our funding award to Seattle Aquarium and Zachary Randell

The Seattle Aquarium was successfully awarded a funding grant to purchase a remotely operated vehicle, ROV and its accompanying equipment, during the 2020 grant cycle.  We are proud and excited to have assisted them in the initial stages of this research to investigate the possibility that sea otters can assist the resilience of marine ecosystems, especially those along the outer coast of Washington.

The Seattle Aquarium, led by Dr. Shawn Larson and Dr. Zachary Randell, is planning a long-term research and monitoring program to investigate the resilience of Washington’s nearshore marine ecosystems. More specifically, they’re looking into whether sea otters help stabilize those ecosystems during climate change-related disturbances, such as anomalous warm-water events. Sea otters, being a keystone species, have long been studied for their beneficial effects on kelp forests, promoting biodiverse and healthy coastal ecosystems. While the possibility of sea otters having an even greater impact during climate change seems reasonable, that question can’t be answered without further study. To that end, Larson and Randell are working to secure additional resources – beyond that awarded by our grant award mentioned above – to launch a new research program centered on that question.

Sea otter research and conservation at the Seattle Aquarium 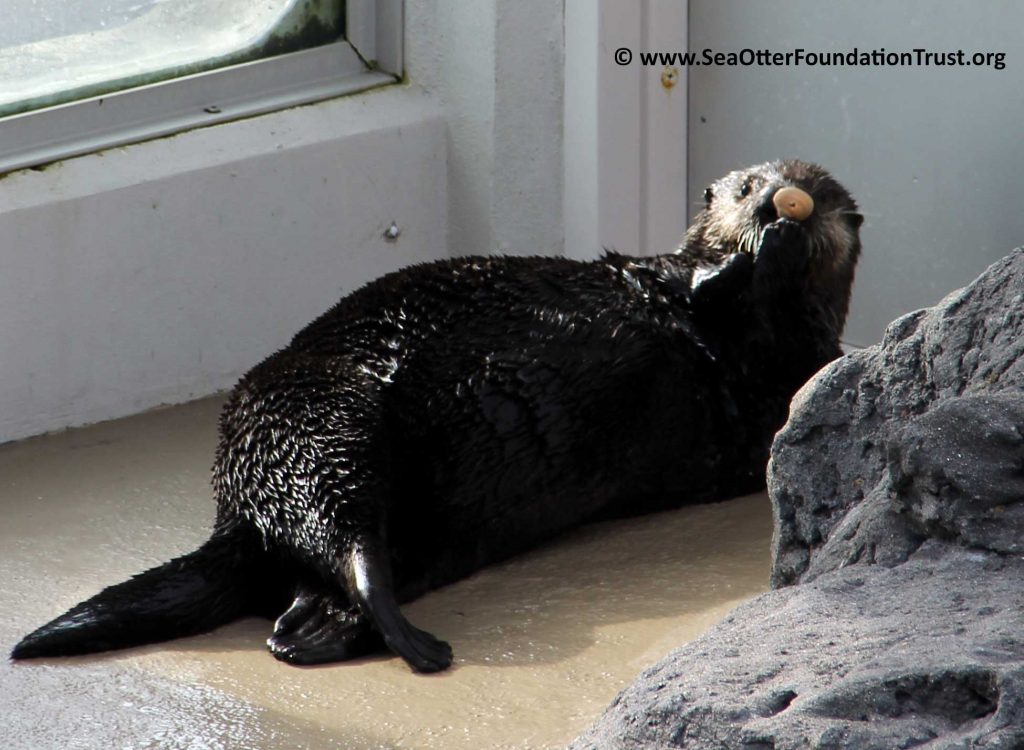 The Seattle Aquarium opened in 1977 and was a city-run entity until 2010 when it began operating as the Seattle Aquarium Society, a nonprofit 501(c)(3) organization. The aquarium has exhibited sea otters since its opening and over the years has become a leader for sea otter research, conservation and animal husbandry. Larson and her team have investigated reproductive, stress and pregnancy hormones, the loss of genetic diversity in sea otters, and, most recently, began studies related to toxic chemicals such as certain types of fire retardants (PBDEs) and liquids used mostly in electrical equipment (PCBs), as well as new studies into the effects of microplastics. In the latter effort, they’re searching for the presence of microplastics in sea otter fecal samples taken from both their sea otters on exhibit and in wild sea otter populations.

The coast of Washington and its sea otters 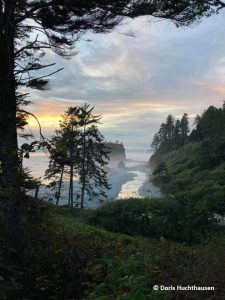 The Washington coast is rugged and a bit difficult as well as time-consuming to access. But, it is certainly not impossible. However, it is less easily accessed than a sandy beachline along the California or Oregon coast. The remote location bodes well for the sea otters of the Washington coast where today there are approximately 2,000 animals.

Sea otters have long been known to have beneficial effects on the nearshore kelp forest ecosystem. One of the most well-known examples is the sea otter-sea urchin-kelp triad. Without too much complication, sea otters eat sea urchins which eat kelp. By keeping the sea urchin population in check, the sea otter creates an environment where kelp grows and ultimately flourishes.

Do sea otters provide ecological resilience in the wake of climate change?

Researchers with the Seattle Aquarium hypothesize that when sea otters are present, they help stabilize kelp forests by preventing some of the negative fallout that would otherwise be associated with climate change-related disturbances such as warm-water or marine-disease events. Scientists, including Randell, will conduct in-depth monitoring of the benthos—defined as the flora and fauna found on the seafloor—along the outer Washington coast, both where sea otters are present, and where they are absent. Aquarium biologists, in conjunction with partners and collaborators—will establish fixed monitoring sites along the Outer Coast and western Strait of Juan de Fuca. There they will use scientific SCUBA methods to survey the abundance (how many individuals are present), distribution (where individuals are), and percent-coverage (e.g., a square meter of seafloor may be found to be 20% colonial sponge, 30% encrusting algae, and 50% red algae). Researchers also plan to deploy environmental sensors to document changes in physical variables such as water temperature, pH, and dissolved oxygen. By documenting the manner in which ecosystems, including the physical environment, change across space and over time, researchers will gain insight into how the Washington sea otter population affects kelp-forest ecosystems, particularly following climate change-related events. 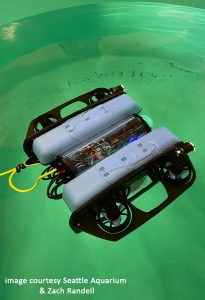 Technological assistance via a ROV

While the Outer Coast is an excellent environment for sea otters, its rugged and remote coastline makes study a bit more challenging. Today, however, there are a variety of technological resources that allow field biologists like Randell to survey the seafloor in areas inhabited by sea otters. One of these resources is a remotely operated vehicle, better known as an ROV.

The Seattle Aquarium approached us with a request to jump-start Randell’s study on whether sea otters stabilize ecosystems. Being successfully selected for a grant award, the Seattle Aquarium was able to purchase a Blue ROV2 along with the accompanying accessories to make the ROV operational in the field. They have tested the ROV at a depth of 70’, and they are currently preparing to complete a pilot study with the ROV in 2022.

According to Randell “We will mount high-resolution, image-stabilized cameras and lights on the underside of the ROV. We will then drive the ROV back and forth above the seafloor, obtaining visual information across a large area. Instead of a human having to watch the videos and manually count all of the species (a time-intensive process), we will train existing machine learning algorithms to automatically extract abundances of species such as sea urchins, sea stars, and certain kelp species, along with percent-coverage estimates of colonial and/or aggregated taxa such as sponges, hydroids, tunicates, bryozoans, and red algae. Together, these abundance and percent coverage estimates—when obtained (1) across a large spatial extent and (2) in areas with varying sea otter density—will provide key information about how sea otters and environmental variables affect kelp forest community structure and ecosystem resilience along the Washington Coast.”